Funding the Future of the Swift Package Index

It’s been almost four months since we launched the Swift Package Index, and we’ve been so happy to see so many positive reactions to it across the community. Thank you all for checking it out and spreading the word.

It’s still early days for Swift Package Manager adoption but we are confident that it will become the dominant technology for Swift dependency management, and we want the Swift Package Index to grow right alongside it.

We believe we’re off to a great start with what we have so far, but this is only the beginning. We have so many ideas for “bug fixes and improvements”! 😂

Many open-source projects are just code and don’t need constant maintenance and monitoring, but the Swift Package Index is a little different. It’s a hosted instance of the site with a reasonably complex automated build system that has run over 600,000 builds so far (increasing by 7,000 more every day!). It takes significant time and effort to keep things running smoothly.

We want to find a way to make sure that we can continue to give this site the time and attention it needs, but we don’t really want to go down the route of including advertising. Instead, we are opening up sponsorship on GitHub.

If you (or your company) would like to support the site, we would be thrilled to be able to make this a community-funded effort for years to come.

Also, a huge thanks to Oliver, who beat us to even announcing this by sponsoring the project yesterday! Thanks for being our very first sponsor. 😍

As part of the Swift Package Index build system, we have processed what must be the most extensive test of Apple Silicon compatibility outside of Apple.

At the time of writing, we currently have 12,942 Apple Silicon builds in our database covering 3,238 packages. Why so many? We test up to three versions of each package and compile each version with both xcodebuild and swift build.

I’m sure that many of the Apple Silicon DTK machines Apple shipped around the world are working very hard, testing apps for compatibility, but I’m not sure any of them have worked quite as hard as ours has. 🚀

What did we find?

As you might expect, there’s plenty of good news. For packages with successful Intel builds, the vast majority also successfully build for Apple Silicon. 👍

There are failures, though, and the most interesting failures are where the build fails on Apple Silicon while the corresponding Intel build succeeds. In cases like this, that indicates a compatibility issue that will potentially need some attention from the package author. We’ve identified 139 packages (~4%) where this is the case, and have compiled a list of them for reference.

There are a few common errors that we’re observing in these failures, and most of them are from one of the following problems:

Even though 139 failing packages might sound like a lot, it’s not that bad, especially when you consider that many of the failures all fail due to an issue in a common base dependency, PerfectLib.

Where do we go from here?

Even though the results are generally positive, it does show that there’s a bit of work that the community need to do to ensure the transition to Apple Silicon is as smooth as possible.

If you’re a package author and do not have a DTK machine at your disposal, please feel free to use ours via the Swift Package Index build system! Make changes to your packages, push them to a pre-release tag (for example, X.X.X-arm-beta-X) and the build system will pick up that tag and build it. You should see new build results, usually within a couple of hours of pushing a tag.

If you have any problems with the build system, there’s a couple of ways to contact us. We’re in the #swiftpackageindex channel over at the SwiftPM Slack, or if it looks like there might be something wrong, please raise an issue on GitHub. 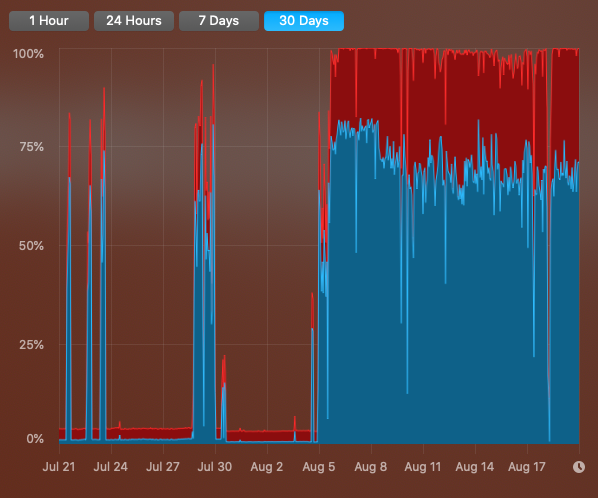 It’s always hard to know when to ship v1 of a project. Which features get included? Are there things that can wait? It’s a balancing act. You’re excited to show the world what you built, but is it good enough?

One decision we made when shipping the Swift Package Index was that a blog could wait. Looking back now, it feels like that was the right decision. The launch went smoothly, you all reacted very kindly and positively to it, and we went back to work fixing bugs and working on new features.

However, we always knew we’d need somewhere to write about what we are doing with this project. We’d love to tell you about some of the interesting technical challenges we faced, but most of all we want to tell you about the new features we’ve been building...

What features? You’ll have to wait just one more week to find out what we’ve been working on, but we’re pretty excited about it, and that’s why now was the right time to launch this blog.

Now we just need to keep writing on it! 😬