It is a truth universally acknowledged that a developer in possession of a good project must be in want of a fast compile. First observed some 200 years ago by Jane Austen, this still holds today as lucky developers take delivery of new M1 machines.

You’ll have seen benchmarks appearing on various sites over the last week, but how do these machines stack up with a real-world Xcode project?

The Swift Package Index is a sizeable open source project and makes for a good test when assessing the new chips, so we’ve created a benchmark tool to give some real-world results.

We are testing two performance aspects: building the project (clean build) and running the tests. These tasks might seem similar, but they stress the machine in quite different ways. A clean build will typically utilise all available cores, where this project’s tests use a dockerised database running on the same machine and are not heavily multi-threaded.

First, we know what you all want to see. The results! 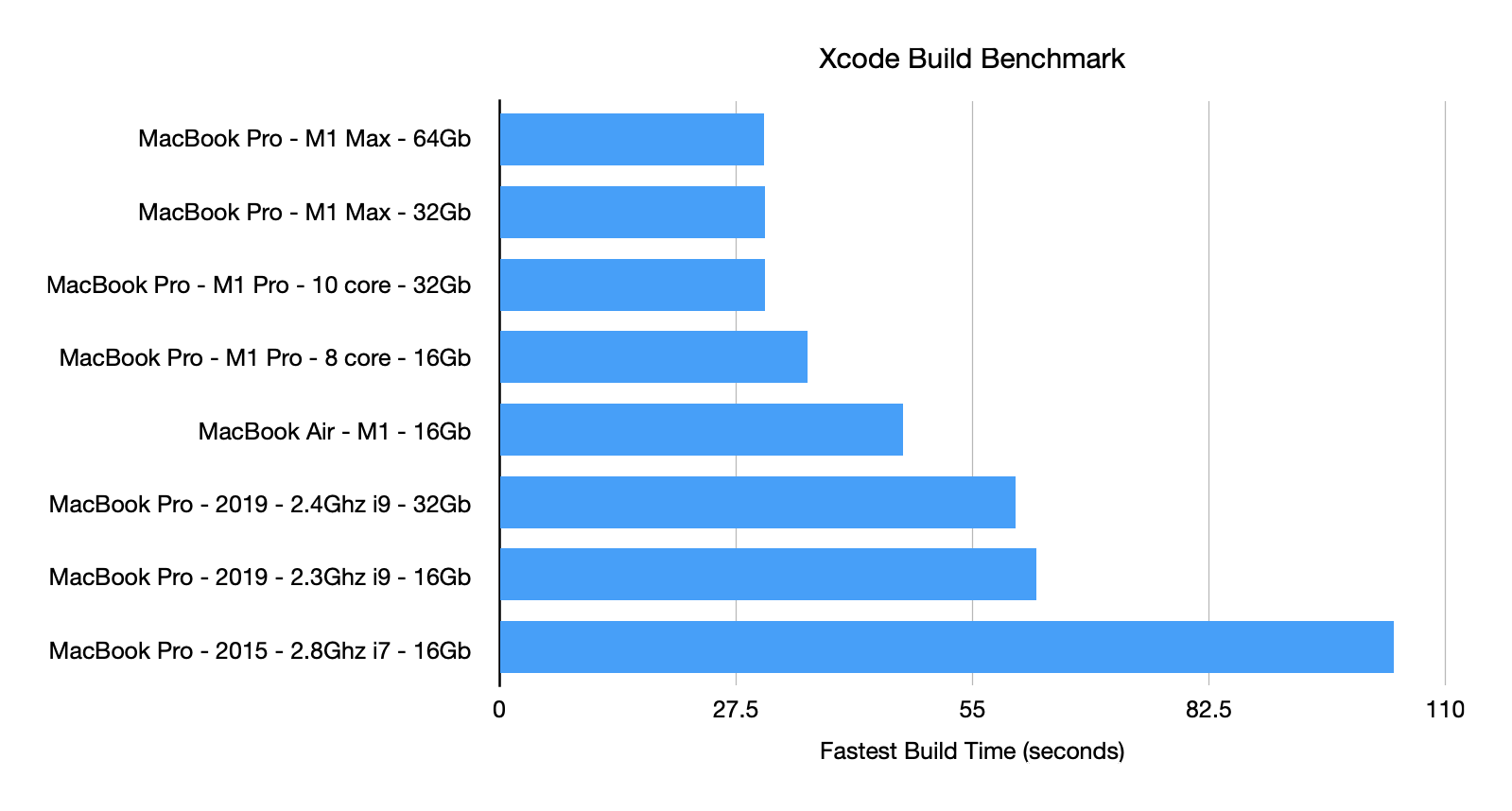 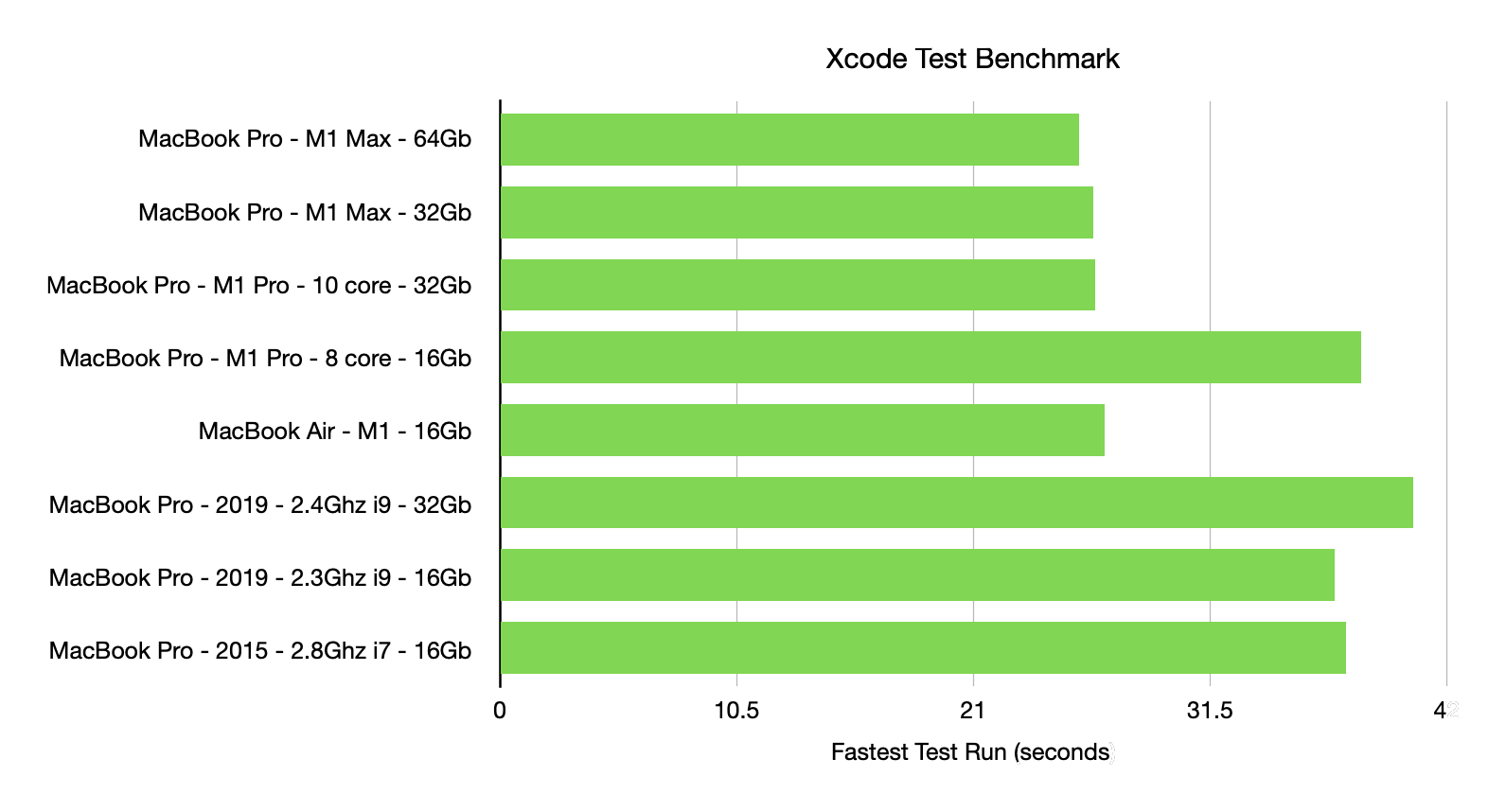 Overall, it’s remarkable that the M1 MacBook Air already had the best performance before Apple introduced the new MacBook Pros, but the M1 Pro and Max chips take this further. They improve on the M1 Air’s best result of 47 seconds with a build time of less than 31 seconds. Those extra cores matter, and the ~35% improvement is in line with what you’d expect, going from a 4+4 performance/efficiency core setup to an 8+2 configuration.

If you’re considering upgrading from an Intel machine to an M1 Pro or Max, you’ll see a dramatic reduction in build times. It’s been a long time since we’ve seen 2x improvements in a machine of the same class, but the best Intel build time is 60 seconds versus the above mentioned 31 seconds of the M1 Max. That is remarkable.

There was a noticeable difference between the M1 Pro 8-core and the M1 Pro 10-core machine, with the 10-core being around 15% faster when building. That’s quite significant but is in line with what you might expect from dropping two performance cores. As mentioned above, we have ignored the test benchmark results for this machine as there may have been a problem with the benchmarking environment for this machine.

There are plenty of reasons to get a machine with a Max chip and 64Gb, but compiling your code faster is not one of them!

If there’s one thing where the MacBook Air suffers, it’s the sensitivity to a warm environment. The fact that the machine comes without a fan is excellent for its guaranteed silence but leads to a noticeable slow-down when used in warm weather, direct sunshine, or when you stress the CPU over extended periods.

You can even see a little of the effect by observing the slight upwards slope of the build benchmarks for the M1 MacBook Air. 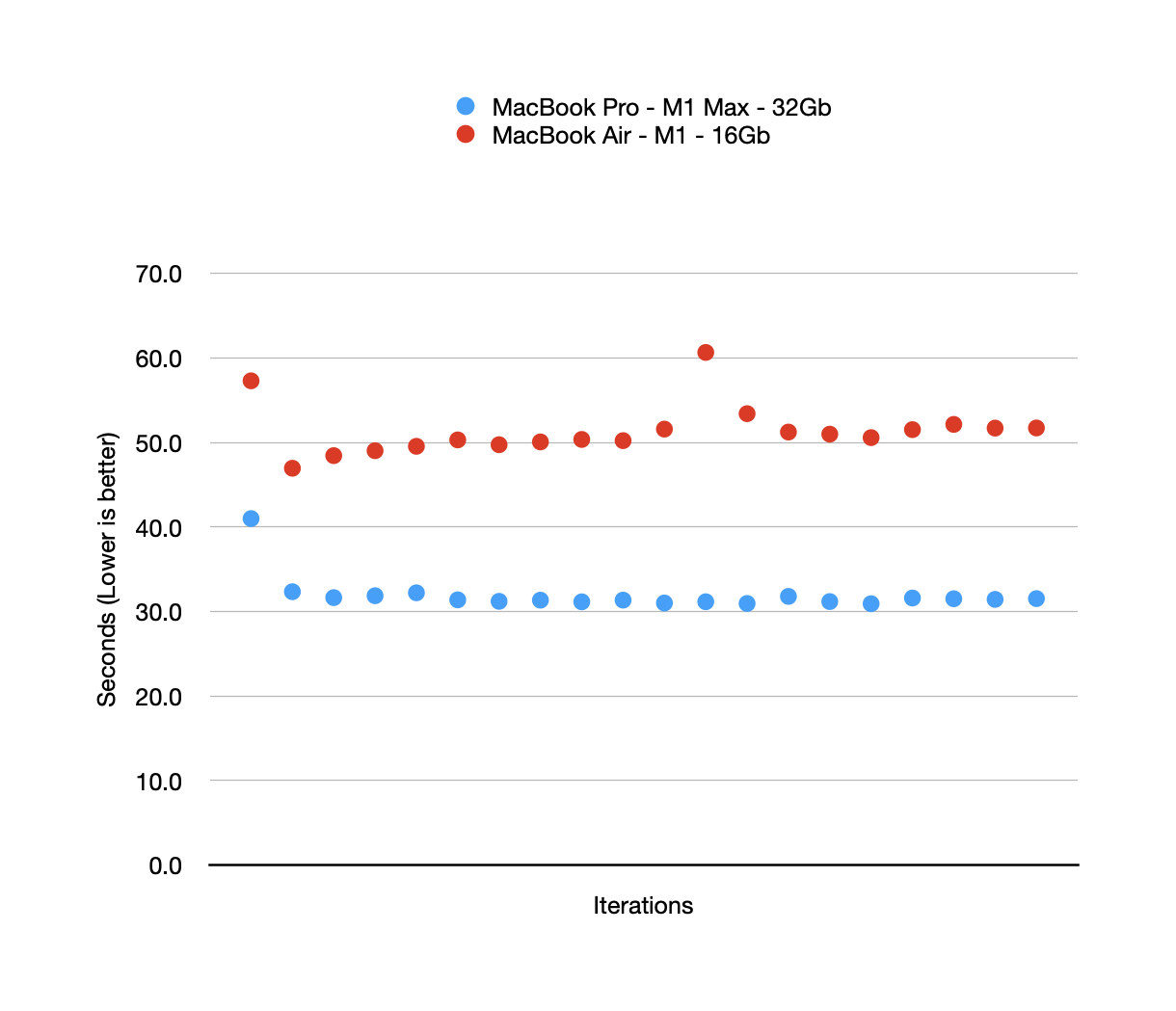 During the 15 minutes that this benchmark ran for, the machine got quite warm to the touch, and the chart shows that it’s starting to throttle a bit.

If you’re using an Intel machine, even the very fastest ones that Apple ever made, it looks like you can expect your builds to be at least twice as fast. Add to that the larger and better screen, the ports, and other minor improvements, and this feels like the best upgrade we’ve seen for developers who prefer a laptop in at least a decade.

If you’re on an M1 machine, the performance is less striking as the individual cores on these new chips have almost identical performance. However, you’ll still see some improvements due to the increased core count and a higher percentage of performance cores.

All of that said, it’s worth remembering one thing, especially if you’re on a tighter budget. The M1 Max MacBook Pro with 64Gb is 100% faster than the fastest Intel machine we tested (30.9 seconds vs 60 seconds), where the M1 MacBook Air is 30% faster than it. However, the M1 Max MacBook Pros tested here all sell for around ~$4,000, and the M1 MacBook Air tested here was ~$1,600. Performance does not scale linearly with price.

There was a time where if you recommended a low-end MacBook to a developer who was just getting started, you’d know that it would be adequate but never great. That’s no longer true, and even the lowest-end M1 machine will have comparable performance to the highest-end laptops.

What should you buy?

Thanks to Christian Weinberger, Toby Herbert, Greg Spiers, and Cameron Cooke for taking the time to run the benchmarks that covered the configurations that we didn’t have available!